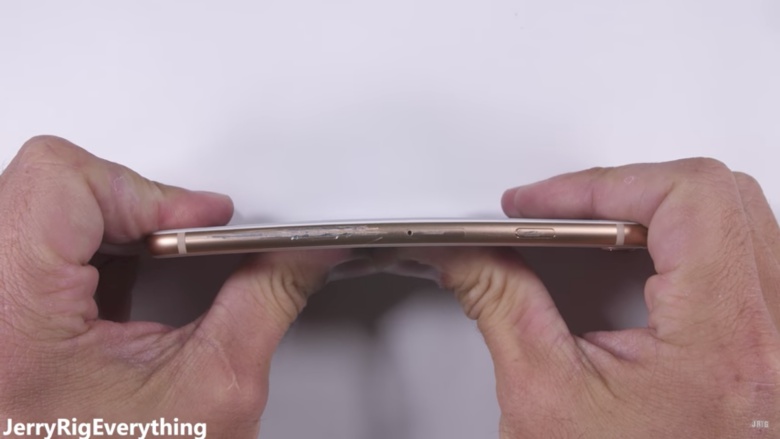 As yet another evolutionary device rather than the design revolution some cash-strapped iFans may have expected, the iPhone 8 is unsurprisingly overshadowed by the much sleeker X, despite the latter’s delays and availability concerns.

We’re talking of course about media coverage and apparent consumer interest, because in terms of critical reception, the 8 and especially 8 Plus seem to be doing just fine.

While we continue to cook up our exclusive in-depth reviews, it’s definitely worth highlighting how the smaller iPhone 8 handled JerryRigEverything’s obligatory durability inspection.

In a word, pretty great. In more, let’s start off by noticing Apple’s “most durable glass ever” and sapphire camera lens claims don’t exactly hold up in real life. The iPhone 8 screen is about as resistant to scratches as any high-end Android display around, and the rear-facing shooter appears to cut a few build quality corners.

Still, there’s no denying this is a robust slab of (mostly) glass and (very little) metal, largely impervious to razor blades, coins and keys, and impossible to bend with sheer force of will. It even bravely combats flames… if you somehow feel that information is relevant to the way you typically use your mobile device.

Meanwhile, iFixit’s comprehensive teardown examination concluded in a repairability score of 6 out of a possible 10, which is much better than Samsung’s DIY Galaxy S8 nightmare, but actually one point lower than last year’s iPhone 7 and 7 Plus grades.

As always, you’re advised to not try any of the above, including scratch, flame, bend tests and routine disassembly, at home unless you know precisely what you’re doing or just want to watch the world burn.