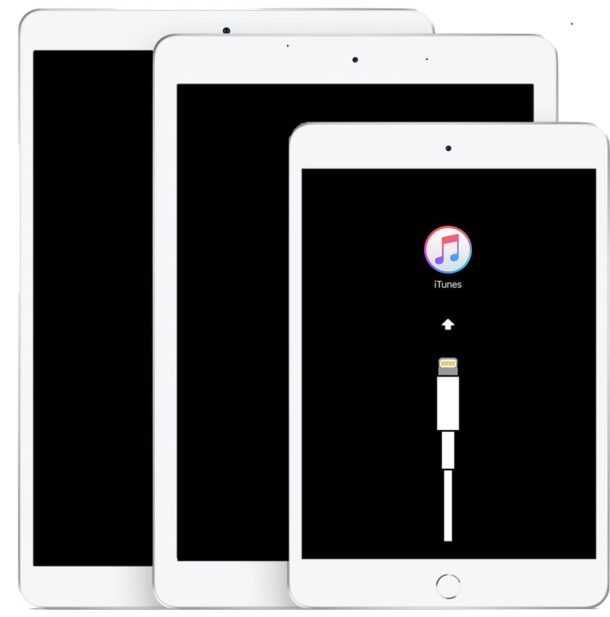 Sometimes an iPad must be placed into Recovery Mode before it can be restored or updated successfully with a computer. For example, if an iPad gets stuck on a black screen with an Apple logo for a very long time, Recovery Mode can usually remedy that. Typically Recovery Mode is used for a troubleshooting endeavor, but it can also be used for downgrading from iOS beta / iPadOS beta versions as well.

To enter Recovery Mode on iPad, iPad Air, iPad mini, and earlier iPad Pro with Home button (2017 and earlier models, this will not work on the modern iPad Pro 2018 and later models), you will need a computer (Mac or Windows PC) with iTunes and a USB cable to connect the device to the Mac or PC with.

After the iPad, iPad mini, or iPad Air has been detected by iTunes (or Finder), it can be restored with iTunes, or updated as usual. If you’re on a beta iOS version, you can also downgrade to the last stable build while in Recovery Mode.

* Use iTunes for MacOS Mojave 10.14 and earlier, and all Windows PC computers will use iTunes too. If the Mac is on MacOS Catalina 10.15 or later, then use the Mac Finder instead of iTunes.

If you want to exit out of Recovery Mode without performing any action in iTunes, you can do so with a simple force restart of the iPad.

After you reboot the device to exit recovery mode, it will boot as normal. Or if it was experiencing difficulty, like getting stuck on the Apple logo screen, it will probably just boot directly back into that if you didn’t actually run through recovery to restore the iPad.

Almost all serious issues with an iPad can be resolved through Recovery Mode, but rarely in some very stubborn cases you may need to put the iPad into DFU mode instead and restore from there. That’s quite rare however, and is really only applicable for when Recovery Mode is not working successfully for a restore or device update.

All iPad, iPhone, and iPod touch models can be placed into Recovery Mode, though the instructions for doing so differs per device.