How to Reinstall Default Apps Deleted from iPhone or iPad

Now that iPhone and iPad users can delete default apps from their iOS devices, you may find it important to know how to re-download those stock apps to reinstall them back onto your iOS device. This is possible with any of the default apps bundle with iOS that can be deleted and then restored, including Calendar, Calculator, Compass, Contacts, FaceTime, Find My Friends, Home, iBooks, iCloud Drive / Files, iTunes Store, Podcasts, Mail, Maps, Music, News, Notes, Podcasts, Reminders, Stocks, Tips, TV / Videos, Voice Memos, Weather, and Watch.

Restoring deleted default apps is done largely the same way you would recover any other accidentally deleted app on an iPhone or iPad, achieved entirely through the App Store of iOS. If you’ve never gone through this process before it may sound intimidating, but once you run through the steps yourself you’ll find it’s quite simple.

If you want to try this out yourself, delete any default preinstalled app from your iPhone or iPad, like the “Weather” app or “Music” app for example. A full list of default apps that can be deleted and restored is further below if you want shortcuts to the apps.

How to Restore Default iOS Apps on iPhone or iPad

Whether the default apps were deleted intentionally or accidentally does not matter, they can be restored to the iOS device the same way:

Open the App Store on the iPhone or iPad

Tap the Search button and enter the name of the default app you want to restore to the iOS device (for example: “Music”, “Weather”, “Stocks”, etc) and choose Search 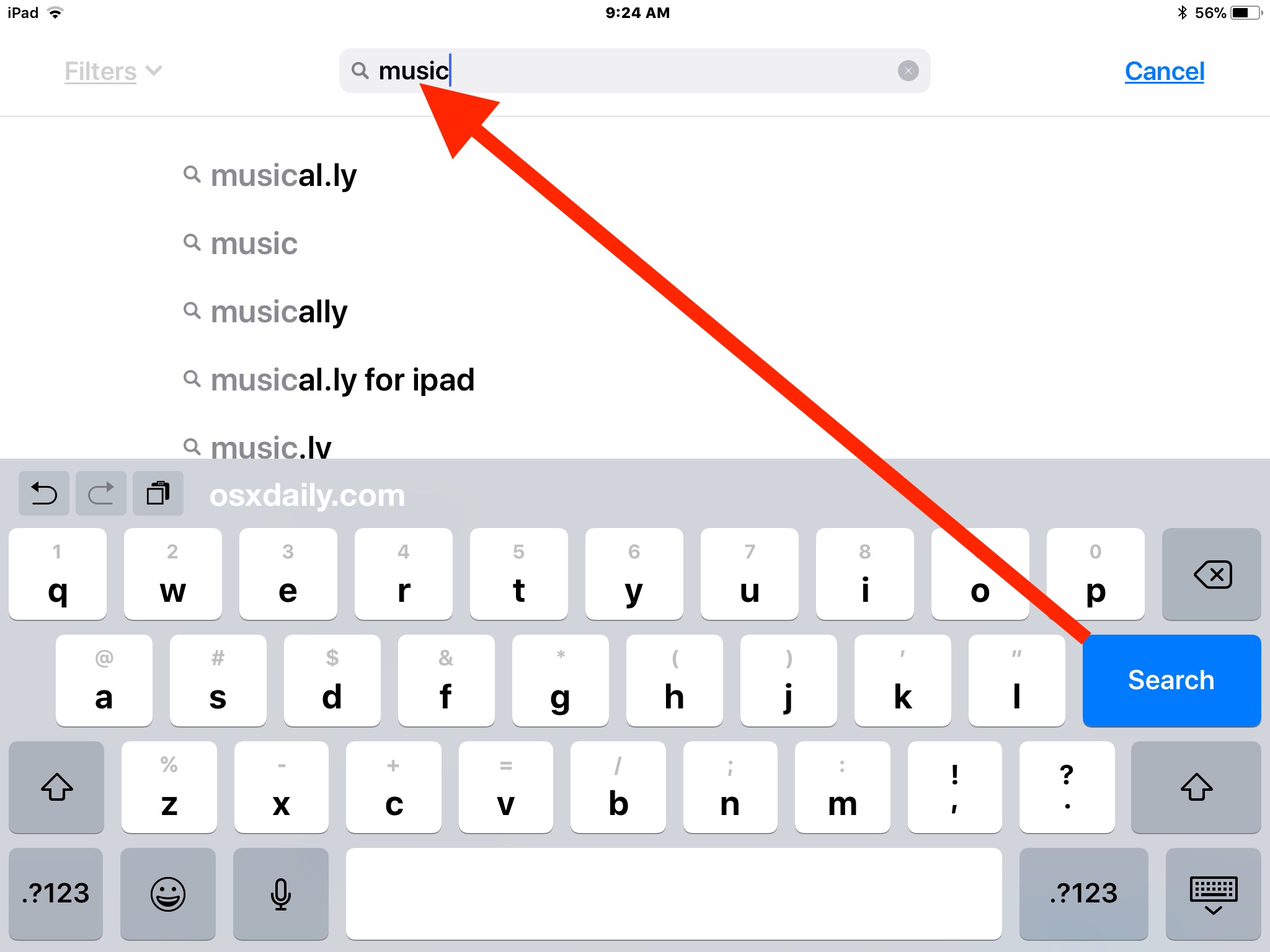 Locate the proper default app, all default iOS apps are from Apple*, then tap the Download icon next to the default app name as it appears in the Search results of the App Store, it looks like a little cloud with an arrow shooting out the bottom 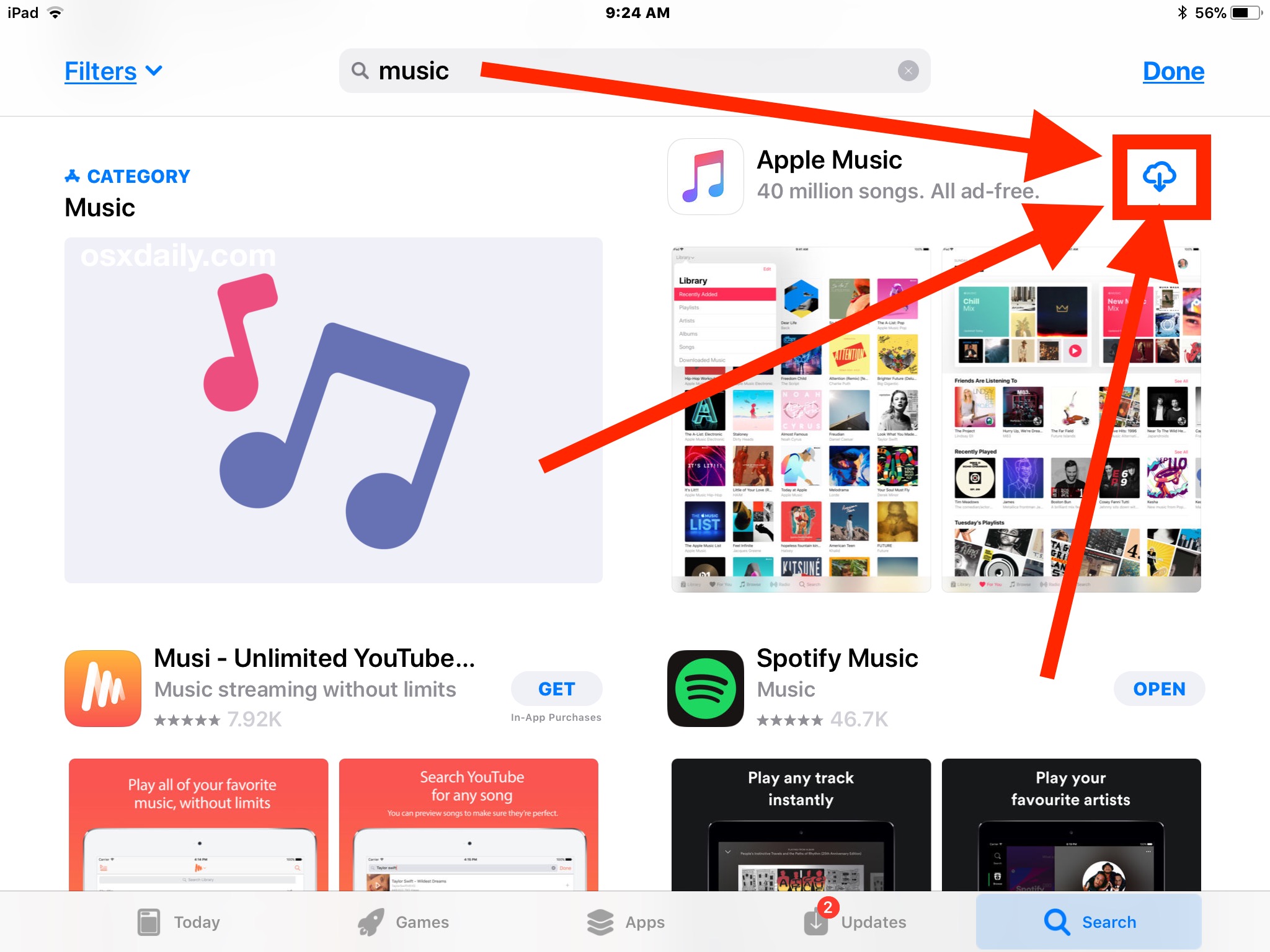 The reinstalled default apps will appear on the device Home Screen as usual. For example, here the Music app was reinstalled by redownloading it from the App Store again:

As you can see removing stock apps from an iPhone or iPad is done the same way you remove any other app on an iOS device, but the capability to remove the default bundled apps on iOS devices is rather new.

* Note that you’ll want to be sure you are downloading the correct default iOS app again to reinstall the intended app. This is more important now that the App Store stuffs ads at the top of search results, along with the generally broad search results often appearing in the App Store for apps with similar purposes or even the same names. For example, there are multiple other music apps, but only one official “Music” app from Apple. To restore the proper default app, verify the app icon is the same as the default app on the iOS device, and that the developer of the app is Apple.

You can also follow direct App Store links to the iOS default apps if you don’t want to bother with the Search function in the App Store of the device. Regardless of how you get to the default app, re-downloading it and restoring it to the device is the same.

These URLs point directly to the App Store entries for the default stock apps in iOS that can be deleted and thus restored by re-downloading again.

Whether or not you want to delete and then reinstall default apps is entirely up to you and how you use your iPhone or iPad. For example, maybe you want to delete the Music app to stop the annoying auto-playing car Bluetooth audio iPhone thing, or maybe because you’d prefer to use an alternative music service like Spotify.

There are a few apps you can not re-download and reinstall, because they can not be deleted in the first place. That includes default apps like Settings, App Store, and Safari.

iPhone 8 Plus vs. LG G6: Which has the best camera in a smartphone? Moto G5S Plus review: Too much of a good thing