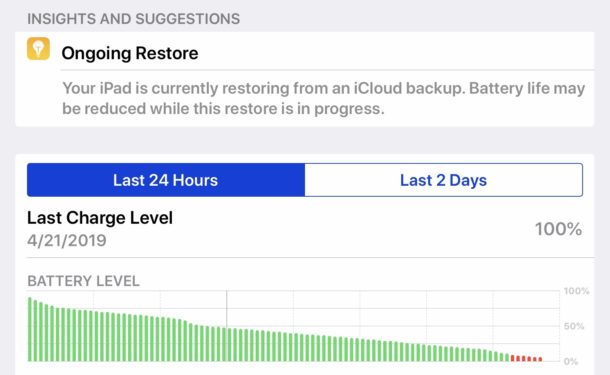 If you have recently setup a new iPad Pro, iPad mini, or iPad and discovered the battery is draining unusually fast leading to subpar battery life on the device, don’t fret, there’s probably a good reason for it.

In fact, if during your recent setup or restore of the iPad you decided to restore from an iCloud backup, that very well could be the reason the device battery is draining down so much faster than expected. We’ll show you how to check if this restore process is happening in the background, and what to do about it.

Note: this is aimed at users who recently setup new devices. If you did not recently restore the iPad, iPad Pro, or iPad mini from a backup, or set up the device and transfer data from another iPad, then you might want to follow more general tips on improving battery life with iOS 12. And yes while we’re focusing on iPad here, this same material applies to the iPhone and iPod touch as well.

How to Check if “Ongoing Restore” is Draining iPad Battery Life 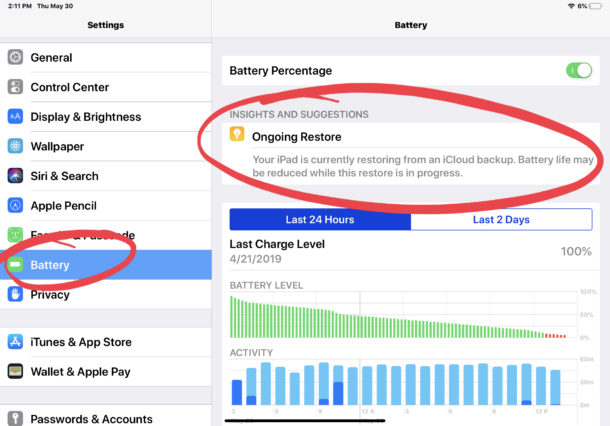 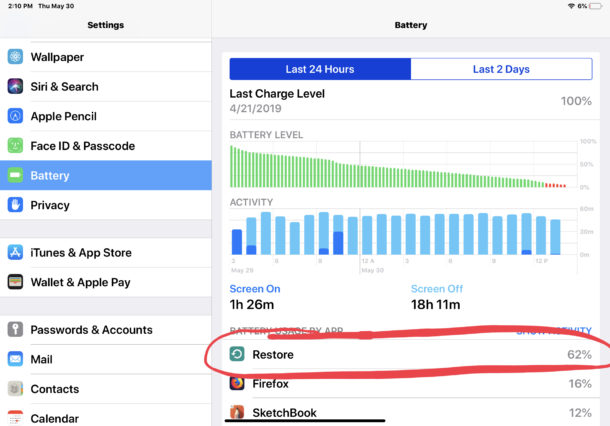 iCloud Backup Restore will complete over time as it completes downloading all pictures, photos, images, videos, apps, local files and data, contacts, music, podcasts, and anything else that was contained within the iCloud backup which is being restored.

How long does “Ongoing Restore” take to complete?

How long it takes an Ongoing Restore of an iCloud Backup to complete depends on several factors, but the two prominent components are the size of the iCloud backup being restored from, and the speed of the internet connection which the iPad is connected to.

The iCloud backup restore must complete for the ‘Ongoing Restore’ process to complete and thereby restore expected battery longevitity to the iPad, iPad Pro, or iPad mini.

OK, my iPad shows “Ongoing Restore” so what should I do?

In the screenshot examples here, the “Ongoing Restore” process from iCloud backup to a freshly setup iPad Pro has taken several days restoring a 25GB backup and has still not yet complete. This is because the internet connections network speed which the iPad Pro is using is not particularly fast. Unfortunately there’s nothing that can be done in that scenario other than wait, and while that ongoing restore takes place on the iPad the battery will continue to drain faster than expected.

Once the restore has completed, battery life will return to normal.

iCloud Backup and restore is an excellent feature for iPhone and iPad users, but because it’s reliant on a good internet connection it has notable downfalls to users who are not based in a place like San Francisco, California or other similarly major metro regions with highly developed broadband internet infrastructure. That includes much of the USA, and virtually any smaller sized city, many suburbs, and many semi-rural or rural locations, which often have 3mbps to 20mbps broadband offerings at best. The lack of sufficient high-speed internet infrastructure in much of a country or any given region obviously has nothing to do with iCloud or Apple however, so if you’re one of the millions of people who has a slower internet connection, that’s just the way it will be until some entity decides to invest in higher speed local internet service.

OK but my internet connection is horrible and this is taking forever, is there a way to get around this never-ending “Ongoing Restore” process?

Aside from finding a higher speed internet connection to use until the backup restore completes to the iPad (or iPhone), the only other option would be to start over and use an iTunes backup restore instead of the iCloud backup restore.

Restoring from iTunes backups require a Mac or Windows PC with the latest version of iTunes, and a USB cable to connect the iPad Pro, iPad, or iPad mini to the computer. Then a backup is made to the computer with iTunes (assuming the computer has sufficient disk space available to store the backup), and then that same iTunes backup is used to restore to the iPad during the setup and restore process. This is usually much faster because a direct USB connection between devices is typically much faster than downloading data from the internet. Sometimes iTunes backups can take a very long time too, but usually that’s due to some easily troubleshooted issue.

Is the Google pixel 3a A good phone ? Wait! Is the Pocophone F1 just hype? ✋