Apple iPad not charging on Computer

iPad Says “Not Charging” When Plugged Into Computer? Here’s The Fix

You may have noticed that iPad can be charged not only with the included iPad charger, but also by using an iPhone charger, or by connecting an iPad to a computer via USB cable to charge. While all of these methods will charge an iPad battery, though some slower than others, sometimes you may encounter an error message with certain charging methods, where the iPad says it is “Not Charging”. The “Not charging” message usually shows up when iPad is plugged into a computer via USB, but sometimes it will show up when plugged into an iPhone charger as well.

While there are many reasons an iPad may report it is “Not Charging”, a particularly common reason relates to the power source, and thus here offers a simple solution. But there are a few other possible issues that can cause an iPad not to charge as well, so lets cover the most common reasons an iPad will show “not charging” message in the top bar of the device, and what you can do to fix it.

Before going any further and tweaking with power cables and iPad chargers, check the iPad charging port for any potential gunk, dust, lint, debris, or another obstruction.

Use a wooden or plastic toothpick and clean out the port on the bottom of iPad to make sure there’s nothing stuck in there.

This probably sounds silly, but it’s more common than you might think to find some kind of stuff jammed into the lighting port on the bottom of iPad, particularly if the iPad gets placed into bags often, or gets used frequently by kids. Mystery lint, play dough, food particles, a grain of rice, dirt, rocks, you’d be surprised at the strange things that can end up jammed into the little charging ports which will prevent the thing from charging at all, so be sure you thoroughly check it and make sure it is clear of obstruction. Anything that interferes with a connection can prevent the device from charging, and while crud prevents iPhone from charging far more often than it might on an iPad, it can still happen to the tablets too.

2: iPad Says “Not Charging” When Plugged Into a Computer with USB? Try This

I frequently see the “Not charging” message on my iPad when it is plugged into a particular USB port on a particular Mac. This suggests that given USB port isn’t sending enough power to be able to sufficiently charge the iPad, so despite being plugged in it may continue to run down the battery, or the very least not actually charge the battery and just show the ‘not charging’ message. Two possible solutions to this are as follows:

* You can always buy a Lighting USB cable from Amazon for a reasonable price here if need be.

Important: if the USB cable is frayed, torn, or otherwise damaged, you will want to get a new USB cable and use that one instead. A damaged charging cable will be unreliable at best and should be replaced as soon as possible, you can get a new Lighting to USB cable from Amazon for a reasonable price here. Be sure you get a certified charging cable, since cables that are not certified often won’t work.

That alone may resolve the issue, but not always.

3: Next, Try Connecting iPad to the iPad 12w Wall Charger

A solution that almost always resolves the iPad “Not Charging” message if it relates to power insufficient is plugging the iPad directly into a dedicated iPad 12w charger from a wall outlet. These come with every iPad sold and look like a little square block that plugs into an outlet. 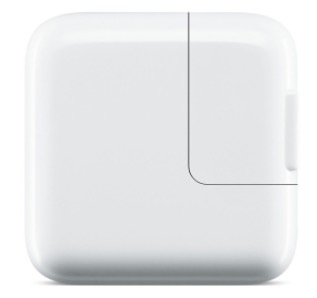 Note you want to use the iPad 12w charger, and not a 5w iPhone charger, because while the iPhone charger should technically charge the iPad, it will do so much more slowly simply because the power output is dramatically less (5w vs 12w). You may also experience that if a game or something power hungry is running on iPad while connected to a 5w iPhone charger, the battery may still drain despite being connected, simply because the charger power output is dramatically less than what is intended for iPad. Thus, use the 12w iPad charger, and it should charge just fine.

If you somehow lost the iPad 12w charger you can buy a new one on Amazon for a reasonable price here, some of them are third party chargers so pay attention to who you order from on Amazon.

If you’re still having problems you can also see some tips on how to fix an iPhone that won’t charge here, most of those suggestions apply to an iPad as well.