But in this case, the MacBook Air screen flickering may actually be software related, and after some investigation it appears the issue relates some specific settings on these new Macs.

While this is likely an uncommon issue, we’ll discuss how to reproduce the screen flickering issue on impacted 2018 MacBook Air hardware, and also a few workarounds that appear to stop it from happening.

If you have a 2018 MacBook Air that is impacted by the screen flickering issue you have probably already observed it by now, as the display flickers in a non-subtle manner. If not, and you want to test for this on you particular 2018 Mac laptop, here are three different ways to reproduce the problem:

I personally can reproduce the screen flickering consistently with a flashlight shining off and onto the top of the display, and with the brightly lit room and glare approaches on a 2018 MacBook Air (BTO w/ 16GB RAM 512GB SSD).

Obviously having a display flicker off and on with a brand new Mac is not particularly encouraging, as often display and screen flickering can indicate a hardware issue. But after some investigation it appears this might actually be software related and not a hardware problem at all (nonetheless if you are concerned about a hardware problem, contacting Apple may be wise. A new 2018 MacBook Air or Pro is likely covered the standard Apple warranty, so reaching out Apple support is a valid consideration).

There are two possible workarounds to the screen flickering issue that are worth trying, both of which suggest this could be a software issue rather than a problem with the display hardware or any other hardware component. Note that neither resetting SMC on the 2018 MacBook Air nor resetting PRAM / NVRAM on the machine has any effect on resolving the display flicker. So what does?

If you use a custom calibrated display profile on the 2018 MacBook Air, try using the default “Color LCD” display profile instead. You can change this setting in the ‘Color’ section of the “Displays” preference panel, found in System Preferences. 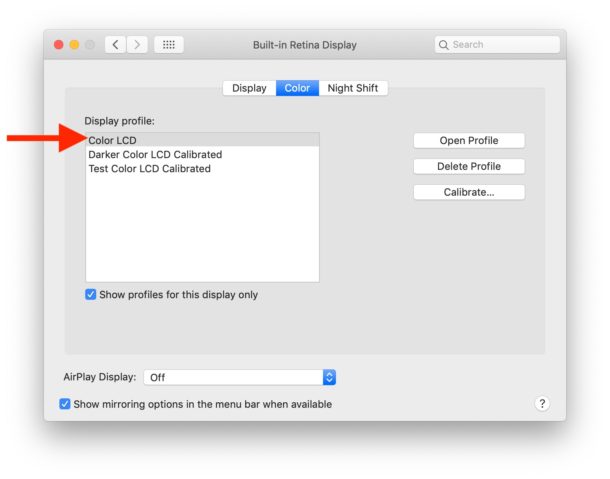 Now try reproducing the screen flicker with the flashlight or screen glare method as discussed above.

Disabling ‘Automatically Adjust Brightness’ on the MacBook Air seems to stop the screen flickering from happening, regardless of any bright lighting or screen glare, or using the flashlight method discussed above. 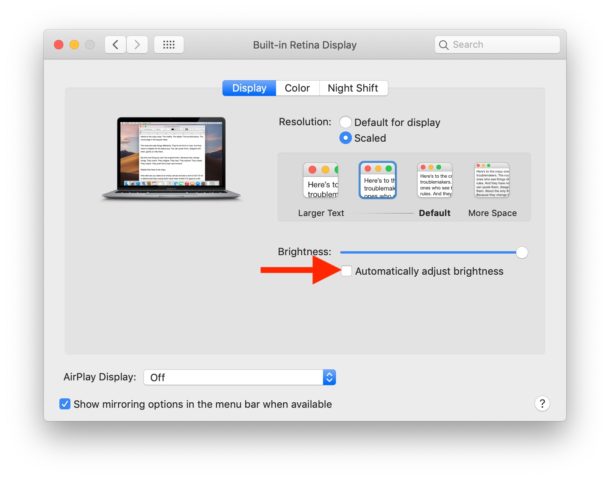 You can toggle this setting off or on in the ‘Display’ section of the “Displays” preference panel, also found in System Preferences.

While this is likely not a particularly common problem, it has impacted enough new Retina MacBook Air owners to surface as a discussion topic in various online forums including MacRumors Forums and various Apple Discussions threads (1, 2, 3, etc). You can also find similar threads pertaining to not only the 2018 MacBook Air but also the 2018 MacBook Pro.

Here is a very short (3 second) video showing the screen flickering on a 2018 MacBook Air when an iPhone flashlight is causing screen glare near the top of the display:

And possibly related is a similar issue shown in the video below on a MacBook Pro 2018 model, of which there are various reports found online as well, though it’s unclear if this screen flicker is caused by the same issue, or if it can be reproduced with the flashlight method or screen glare as discussed above.