How to Sort Files on iPad

❤ How to Sort Files on iPad and iPhone

The ability to sort files in the Files app on iPhone and iPad is a little hidden however, and if you open the app initially you won’t see any sorting capabilities immediately available. Instead, the iOS Files sorting functionality is hidden from initial user view, but it’s quite simple to reveal and use once you learn how.

Though sorting files and folders in Files app for iOS is basically the same on iPhone and iPad, the two are slightly different in appearance and behavior, so we’ll be covering them separately. Nonetheless if you learn to sort the Files app on one device, you can apply the same general logic to the other device too.

How to Sort Files by Date, Name, Size, or Tags on iPad

Changing how files are sorted in the Files app for iOS on iPad is simple enough, the screenshots here show the Files app in horizontal landscape orientation but it works the same in vertical portrait orientation too: 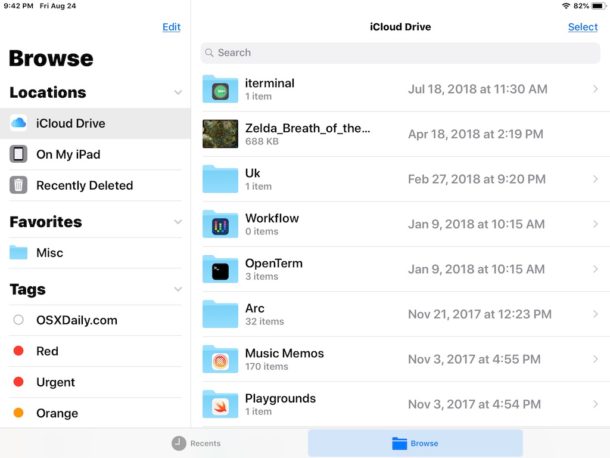 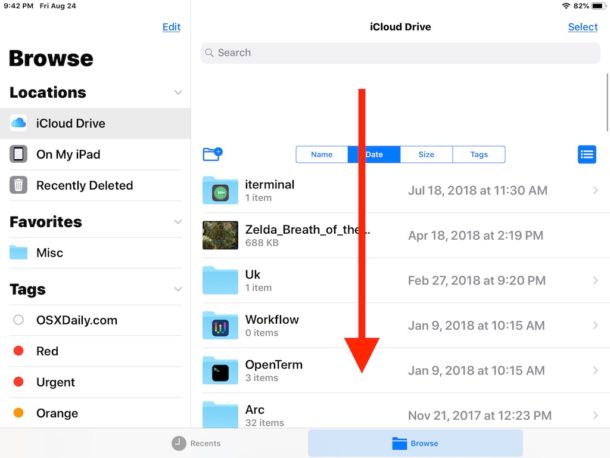 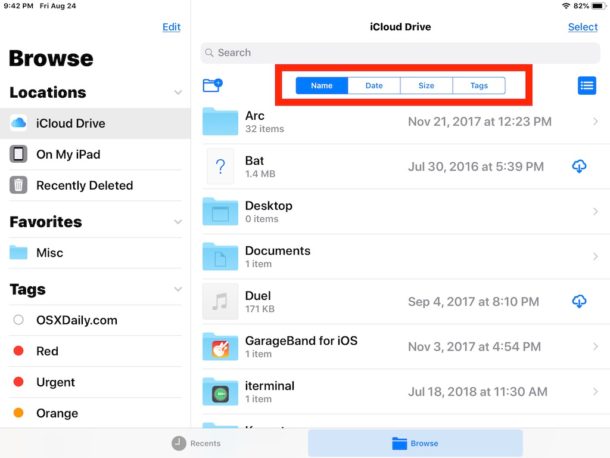 How to Sort Files by Date, Name, Size, Tags on Files app for iPhone

The file sorting features in Files app for iOS on iPhone is basically the same as the iPad, though the app looks a little different to accommodate for the smaller iPhone display, and the sorting options show up in a pop-up window rather than at the top of the Files app display:

Whichever sorting method you choose will take effect instantly on either the iPhone or iPad, and you can change it again at anytime by repeating the steps above and selecting a different sort method in the Files app.

Sorting by name or sorting by date are perhaps the most useful sorting options for most iOS Files app users, both of which are equally useful and popular on the Mac too. And yes, as most Mac users probably know, the Finder in Mac OS also offers file sorting by date, name, kind, size, and much more. Finder on the Mac is much more capable and feature rich than Files on iOS. however, so if you’re accustomed to the myriad options available in Finder you may have to scale back your expectations when using the Files app in the iPhone or iPad world.

File sorting is just one of a variety of great features in the Files app for iOS, which functions as a simple file management and storage solution for iPhone and iPad users, for both local storage and storage through cloud services like iCloud Drive, Google Drive, Dropbox, and others. The Files app has a variety of convenient file management options available, including folder creation, file and folder renaming, file tagging, simple zip file handling for saving and previewing, a customizable sidebar with Favorites, and much more. The Files app in iOS is sure to develop further and gain even more functionality as iOS continues to evolve too, so there should be even more exciting options and features available down the road in future releases of system software for the iPad and iPhone.