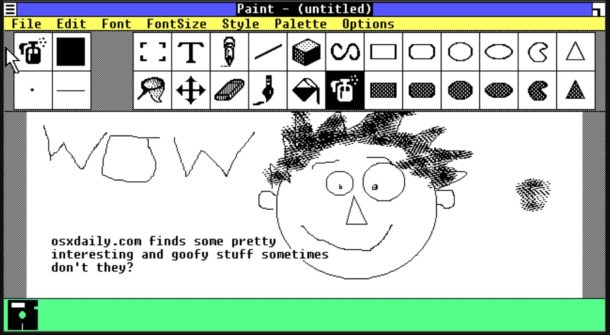 You can run the very first version of Microsoft Windows 1.0 with almost no effort, and right in your web browser! If you’re feeling like experiencing what the Windows PC world was like in 1985, then you’re in for a real retro treat.

All you need to do is visit a webpage in a modern web browser to load Windows 1.01 today and play around with it, it should work on any Mac or PC.

You’ll have all the greats you know and love, including MSDOS.EXE and COMMAND.COM, WRITE.EXE, PAINT.EXE NOTEPAD.EXE, CLOCK.EXE, CALC.EXE, and more!

Note: press the ESCAPE key to regain use of the mouse cursor if it locks into the Windows 1.01 virtualization window. 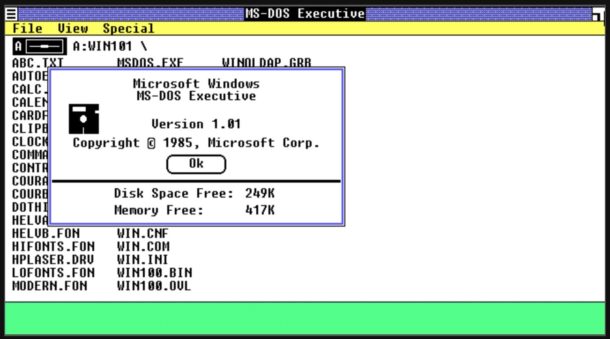 This is obviously not for serious use or consideration, but it sure is fun to play around with, and it makes for an excellent proof of concept to demonstrate just how powerful modern computers and web browsers are when you can virtualize an entire operating system just in a web browser.

If toying around with ancient Windows 1.0 whets your appetite for nostalgic computing experiences, you’d probably also enjoy using the very first web browser called WorldWideWeb, running Classic Mac OS in a web browser, running HyperCard in a browser-based MacOS emulator, or running Linux in a web browser too. Or if you’d rather experience some retro computing locally, you can download and run Windows 95 as a self-contained application, and we’ve covered many other emulator posts and virtual machine articles before too.

Microsoft makes some augmented reality headsets: the Hololens. It’s their own product. Now, it’s time for the PC manufacturers to make some VR headsets.

Microsoft isn’t alone now in making some real development in the field of virtual reality. Yes, it’s got its own augmented reality visor that costs way more than average consumers can afford. But it takes more than just that to even get involved in the ecosystem that the HTC Vive, Oculus Rift and PlayStation VR has been dominating so far.

Microsoft’s answer to this: get some hardware manufacturers to make Windows 10 supported PCs. This was the case in terms of PCs and now some VR headsets will get the same treatment from Microsoft.

The executive vice-president of Windows and Devices, Terry Myerson, was the one who announced that Microsoft is partnering with HP, Lenovo, Dell, Asus and Acer to make VR headsets that are compatible with the Windows 10 Creator’s Update.

The Creator’s Update will give users new features like:

The community library will be available for the HoloLens and the upcoming Microsoft-supported VR headsets. The Creator’s Update will arrive in Spring of next year on all Windows 10 devices free of charge.

How about the new VR headsets?

According to Terry Myerson, “These headsets will be the first and only to ship with inside-out, 6-degrees of freedom sensors. Unlike every other VR headset on the market today, it means there’ll be zero reason for a separate room, zero need for a complicated setup, and while those less immersive accessories today cost over $500—most of the time requiring a new, expensive device, we are announcing today that these Creator’s Update accessories start at just $299.”

No clear list of specifications that these cheaper virtual reality headsets will be trying to achieve or whether they will incorporate some form of true positional tracking or not, as ‘6-degrees of freedom, inside-out’ doesn’t quite cut the mustard when it comes to determining exactly what sort of room-scale ability the headsets will have, computer vision-based or otherwise. If Microsoft is aiming for the lower end of the PC hardware spectrum however, we’re sure to see lower screen resolutions at the very least.

Well, it’s not the end yet for Nokia this time around as Microsoft keeps making new feature phones that reminds us of the golden age of Nokia.

Microsoft is still on it. Yes, making Nokia phones. Just when we thought the cellphone giant of the early 2000s will never be able to grace the store shelves, Microsoft surprised us with an announcement for the new Nokia 216 feature phone. A feature phone in 2016. This is interesting and it is worth to look at, even if out of nostalgia.

The phone business acquired by Microsoft, Nokia, is supposed to be sold to FIH Mobile – a Foxconn subsidiary. It is speculated that it will be worth $350 million. But instead of the sale to be announced, the company released the most basic phone Microsoft makes. It will be available in India for just $37 next month. It will have an Opera mini browser and a headphone jack. Very nice, indeed.

The Nokia 216 and its dual sim version will be launched in India. Here are its specs.

This might be the last Nokia phone to be made.

Microsoft won’t stop with its Hololens for enterprise use but it will continue even further as to make each Windows users be enclosed in a Holographic Shell.

During Intel’s Developer Forum, Microsoft took the chance to announce its Holographic Shell to make the Windows operating system be a single unified platform for VR, AR and MR. This is expected to arrive to all Windows-based users by 2017.

What is Windows Holographic?

Based on the name, Holographic may have been reinforced by now with Microsoft’s existing augmented reality visor, the Hololens. This is an extension to the platform that Microsoft has been building upon in the field of VR, AR and MR. Virtual reality, augmented reality and mixed reality.

In Microsoft’s Windows Holographic lexicon, it seems to mean different forms of disparate virtual content. In the case of the demonstration, floating 2D windows presented in an immersive 3D environment. This results into a very seamless combination of real and virtual elements in the user’s perspective.

We reported recently that Microsoft had stepped up it’s efforts to bring its HoloLens AR visor to businesses in a more Enterprise focused fashion with the launch of ‘Commercial Suite’, with this announcement that a proper, integrated Windows-based platform for VR, AR and MR applications will push to desktop operating systems everywhere next year, Microsoft appear to finally have a plan on how to capitalise on the immersive technology revolution.

Microsoft’s continued campaign for the Hololens to be business-oriented is taking shape now with the Commercial Suite for enterprise use.

With the rise of VR or virtual reality hardware, Microsoft is ready to release it’s Commercial Suite for enterprise use. The higher price tag of $3000 is quite steep for enthusiasts but the augmented reality visor, the Hololens can provide what the business sector might need in real world applications.

The price, is however, negotiable depending on the bulk of the order.

With the premium price, this is what comes inside the box:

Effective on July 29, Microsoft is gonna strip you off of your free bonus free storage to just 5Gb. So better start offloading some files from your device.

Microsoft in it’s great (sarcasm) move to reduce freebies for its users has disappointed many loyal users of OneDrive. The 15Gb free plan and the 15Gb camera roll bonus is going away on July 29 leaving users with just 5Gb free online storage.

By July 29, all free storage spaces will be not eligible for file uploads but files can still be accessed if you want to. Failure to backup within a year and your files may be deleted for good.

This poses a lot of problems. This means that if you have more than 30Gb total free online storage then you’d have to download them all on a local drive, incur some data charges, consume disk space on your device. On the other hand, if these cloud files are not so important at all, then deleting them is also a great option to solve the problem.

Google Drive can be a great alternative with its bigger 15Gb cloud storage option where you can migrate all your OneDrive files. But on a proactive approach, buying cloud storage from Microsoft is even better.

The future of both companies seem to look brighter with their new team-up. Xiaomi and Microsoft signed a patent for cross-licensing on Xiaomi’s apps with Microsoft’s own trademarks apps. Is this a good news?

Microsoft and Xiaomi have recently announced their deal on pre-installing Skype and Microsoft Office on Xiaomi Android phones and tablets. These future devices that will be released in September 2016 will be a result of a cross-license patent portfolios that both companies signed. All apps included in the patent were not entirely showed.
Xiaomi’s Hugo Barra tweeted about this and was then announced in a press release from Microsoft. The senior vice president of Xiaomi, Xiang Wang said,

“We are excited to be working closely with Microsoft on a broad technology collaboration partnership. As demonstrated by this agreement with Microsoft, Xiaomi is looking to build sustainable, long-term partnerships with global technology leaders, with the ultimate goal of bringing the best user experience to our Mi fans.”

Microsoft have made the same deals with other smartphone manufacturers in the past. Most well-known partners of the same patent was Samsung with their flagship Galaxy S6 onwards.

Looking it in a proper perspective, Microsoft’s strategy of “mobile first” surely motivated them to strike deals such as these. Making their apps available right out of the box for users gives them an advantage compared to other third party developers. Xiaomi can use this as a leverage to expand distribution and dealership on Europe and North America. The Chinese company have been successful to most of Asia, India and Brazil.